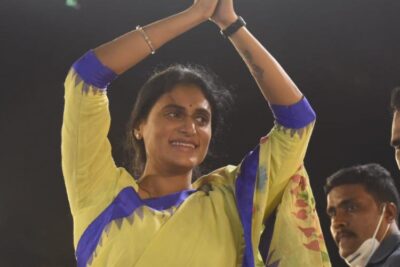 YS Sharmila said she was inspired by her father late YS Rajasekhar Reddy’s vision of a welfare state.

Sharmila told the reporters, after interacting with her supporters at her residence in Hyderabad.

“My objective is to establish Rajanna Rajyam, a welfare state envisaged by my father late Y S Rajasekhar Reddy (former chief minister of combined Andhra Pradesh) in Telangana. I am confident of bringing the glory back to the state”.

“There is no Rajanna Rajyam here. Why it’s not there. Why can’t we bring it,” she said in a brief conversation with reporters outside Lotus Pond, the YSR family residence in posh Jubilee Hills, Hyderabad.

“We will bring ‘Rajanna Rajyam’ in Telangana,” said Sharmila, adding that she would soon make an announcement regarding the details.